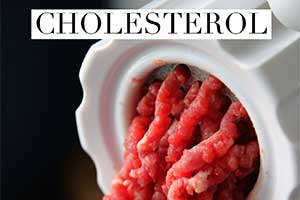 Cholesterol and the new evidence

As a nutritional therapist I am always on top of my game...

Cholesterol and the new evidence
As a nutritional therapist I am always on top of my game. We are expected to do 30 hours plus per year of continual learning development which we have to prove to a board called BANT (The British Association for Applied Nutrition and Nutritional Therapy). BANT is the professional body for Registered Nutritional Therapists that we have to subscribe to every year, and which I advise everyone who is looking for a qualified therapist to look on. BANT and other sources such as webinars and magazines keep us up to date with the latest research that comes out and probably will not hit main stream (the public) for about 5 years. So, ladies and gentlemen, you are going to hear about it here first.

The magazine IHCAN (Integrative Healthcare and Applied Nutrition) have reported the new learnings that endotoxins (A toxin present inside a bacterial cell that it releases when it disintegrates) in the gut could be the source of chronic inflammation. Chronic diseases such as cancer, cardiovascular disease, diabetes, obesity, autoimmune diseases and depression share a common aetiological pathway: inflammation. Chronic inflammation itself can be caused by factors such as physical inactivity, smoking tobacco, and living in an area of high air-pollution. What has just come out in this research is that gut-derived bacterial endotoxin (Lipopolysaccharide, or LPS) has emerged as a potential factor contributing to chronic low-grade inflammation.


Foods that will help to lower cholesterol are:


However in the new study, these endotoxins are responsible for atherosclerosis, formally thought and could still exist in some people to be the fault of a cholesterol build up in the arteries. The study proves that the endotoxins live on processed meats such as burgers and mince, but also cut vegetables susceptible to spoilage, such as diced onion, grated carrot, watercress and beansprouts stored at refrigeration temperature for extended periods of time. So my advice is to eat fresh produce, including meat, fish or vegetables that have not been minced or processed, unless immediately before consumption. Let’s see the return of our friendly butchers!