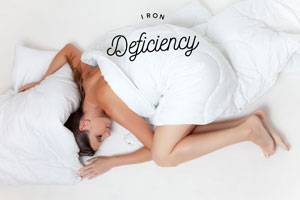 The Impact of Iron

The Impact of Iron on Health and Wellbeing by Joe Thomas...

The Impact of Iron on Health and Wellbeing by Joe Thomas

Iron is not only a building block of our planet but it is also an essential mineral for the human body, necessary to ensure we stay fit and healthy. In the periodic table iron is known by the symbol Fe and it’s the fourth most common element in the earth’s crust. Iron has played an essential role in industrialisation and it is estimated that of all the metal refined today 90% is iron.
Let’s identify some key questions which will highlight how vital iron is for our survival.

Why Do We Need Iron in Our Diet?

Iron is an essential constituent of haemoglobin, which is present in our red blood cells and is responsible for transporting oxygen from the lungs to the tissues. Iron is also essential for the functioning of our metabolism. It is stored in the body until needed and then plays a part in the production of enzymes and proteins. This is particularly important for recovery after exercise or a period of illness.
How Do I Make Sure I Eat Enough Iron?
It is recommended that in healthy adults your iron intake should come from your diet. Guidance levels are usually given as 8.7mg of iron a day for men and 14.8mg a day for women.
Excellent sources of iron are red meat, beans, nuts, eggs, wholegrains, dried fruits and dark green leafy vegetables such as curly kale and watercress. Liver is also an excellent source of iron but it shouldn’t be eaten during pregnancy as it contains high levels of Vitamin A which can harm an unborn baby. On a whole, there is no data to indicate that dietary iron is lacking. A significant factor in the progression anaemia and iron deficiency in developed countries such as the UK and America. The conventional diets contain a broad range of foods containing sufficient levels of iron.

What Happens If You Have an Iron Deficiency?

Despite iron deficiency not being a major concern in developed countries, it is also not uncommon. In the general population children up to the age of 4; girls between 11 and 18; women between 19 and 24; and women between 35 and 49 were all found to exhibit low levels of serum ferritin, which indicates increased risk of iron deficiency. This was measured against the guidelines issued by WHO. Adults over 75, women in low-income groups and vegans and vegetarians were also found to be at risk.
Iron deficiency can be caused by a variety of reasons. The person may not be consuming sufficient iron-rich foods; they could have impaired absorption; or they could have high levels of blood loss due to gastrointestinal disease or menstruation. If levels remain low over a long period, it is generally perceived that this can lead to anaemia. The main symptoms of this health issue are tiredness; heart palpitations; a pale complexion; and, because iron is so crucial for the transport of oxygen, shortness of breath. In children it can also affect the development of their motor function and behaviour. In pregnant women it has implications for the outcome of pregnancy. (Nazanin Abbaspour, 2014)
If you think you may be deficient in iron, it is always recommended that you have a blood test taken by your GP to check. Do not increase your iron intake through supplements without medical advice as too much iron in the body can be detrimental.

Is It Dangerous to Consume Too Much Iron?

Healthy adults and children will find it very difficult to consume too much iron from food alone as the rate of absorption and the level in the body is tightly controlled. However, if you were to consume copious levels of iron, it can lead to a condition called hemochromatosis. This can lead to diseases such as arthritis and diabetes and cause damage to the liver and heart. It may also damage the intestinal mucosa and cause systemic shock and death.
Due to this tight regulation of iron, it is noteworthy that altering red meat intake will not significantly affect iron levels. Also, a study by COMA actually found that the reduction of red meat intake will significantly reduce the chance of colorectal cancer. Therefore, those who believe a reduction in eating red meat will make them iron deficient may actually be better off with less. (Amanda J. Cross, 2010)
Currently, it is challenging to measure how much iron someone is consuming; it is not always clear how each individual responds to iron intake; and finally there is a lack of markers which can assess iron deficiency or excess in science. This balance between too much and too little iron in the body often makes it difficult to assess the dose which will be right for an individual if it is deemed they need their diet to be supplemented.
There are several factors which may make the individual at higher risk. For example, those with hereditary haemochromatosis are shown to have mutation in a gene referred to as the HFE18 gene. (Jacob Alexander 2009) It may also be suggested that those with ‘leaky gut’ syndrome, may be less capable of regulating levels of iron take through the intestinal wall.

In conclusion, more research in science on the importance of iron is fundamental to making more concrete conclusions. Therefore, while it is advisable to be led by the current guidelines concerning iron intake, it is as yet far from clear how individuals will respond to an increased iron dosage and what the overall risks are associated with iron deficiency and iron excess. Despite this, there is sufficient evidence that caution is advised, as damage can be an adverse result. It may be wise to look for symptoms of iron related diseases as described, particularly if you reside within a sector of the population that presents higher risk.
Studies and scientific references:
http://www.ncbi.nlm.nih.gov/pmc/articles/PMC3999603/
http://www.ncbi.nlm.nih.gov/pmc/articles/PMC2840051/
http://www.nature.com/