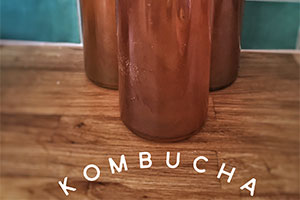 The first recorded use of Kombucha originated from China in 221 BC during the Tsin Dynasty and was known as the &rsquoTea of immortality&rsquo. Many years later a Korean physician called Kombu treated the Emperor Inyko with the tea and took his name, &rsquoKombu’ and &rsquocha’ meaning tea.

Kombucha starts out as a sugary tea, which is then fermented with the help of a SCOBY (Symbiotic Culture of Bacteria and Yeast). The SCOBY then feeds off and absorbs the sugar, producing a naturally fizzy and refreshing fermented drink.

On first glance at the SCOBY, it is very strange looking but it seems to act like a plug, a jelly like layer on top of the kombucha, maintaining a specific environment inside the jar, almost like a mobile home for friendly bacteria and yeast.

What are the benefits of kombucha?

There are unfortunately little scientific evidence available that would validate the beneficial effects of kombucha for humans. However, the little evidence that there is points to a distinct benefit for detoxification, anti-oxidation, energising potencies and an increased immunity. It has even been quoted to reduce belly fat, particularly in men. This probiotic beverage produces advantageous by-products such as glucoronic acid, gluconic acid, lactic acid, acetic acid, butyric acid and malic acid; vitamins, particularly B vitamins and vitamin C; as well as amino acids and enzymes. In lab results, kombucha was shown to protect against stress, improve liver and kidney function. Many people of all ages have found improvements such as the metabolism of the body normalising, bringing it back into balance and generally giving them zest for life. Other perks that have been noticed are increased intestinal flora (which improves immunity), cellular strengthening, a general antibiotic effect and a balancing of the blood pH.

So there&rsquos no excuse not to try it! Start with a small shot size glass a day and build it to 1 or 2 healthy glasses a day for a glowing start to your day.
You can buy a Kombucha starter kit from your local health food store. Once you get going, half and pass the SCOBY on to your friends and spread the love and health!